What’s in a wet year?

How did your garden do this season? Did you get any ripe tomatoes? Did the slugs feel unending? Did some funky new mould break your little green heart? If you don’t have a garden, perhaps you felt like the summer never really got going. Cool, cloudy, wet and even wintry at times, this past summer was ‘meh’ if you were lucky, and devastatingly wet if you were unlucky.

If you’ve been paying attention you know that we have the La Nina weather pattern to thank for this. When La Nina was officially announced in spring of 2020 many farmers rejoiced. As the rain began to fall, dams filled up, creeks started flowing again and hope sprouted like the epicormic growth on all those poor bush fire scorched trees. Coming off a ‘normal year’ perhaps the prospect of a La Nina season would have been approached with more scepticism, but considering the preceding years of record breaking drought, the rain felt like the break we had all been waiting for. No longer would our daily anxiety levels be calibrated by smoke, dust, wind direction and maximum temperatures, here was our chance and we were determined to have a good year! 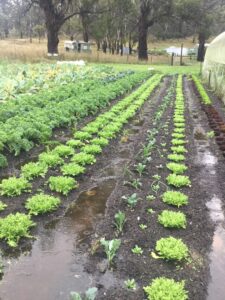 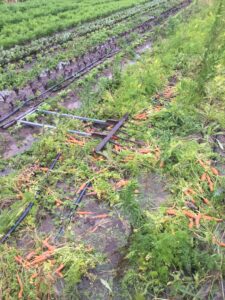 That’s why when an agronomist told Emily at Brightside Produce that this would be the hardest farming season she had had so far she didn’t want to believe him. Surely rain is better than no rain right? But after heavy rains in October she watched her entire tomato crop go under water for weeks. The plants that survived were yellow and stunted due to the water logged soil, only grew to about half their normal size and succumbed early to disease. Other producers were struggling with similar issues with 50% of the potato crop at Hazelwood lost to rot, and entire pumpkin crops (amongst other things) lost to flooding at Prana Produce. With such saturated soils many folks struggled to replace these lost crops, as new transplants would simply rot in the ground or be demolished by the huge numbers of slugs, snails and rodents. With all the rain came excessive humidity, which meant that many producers were battling to control the rapid spread of moulds and mildews through their crops. In addition to all this, there was the near constant cloud cover (and sea mist for those closer to the coast), which caused low temperatures and a lack of sunlight and resulted in very slow growth of all crops all season long.

After a soggy spring and a cool, cloudy summer, many of our producers put a lot of effort in to planning for a bountiful crop in autumn. Decisions were made to cut losses on eggplant crops that came to nothing, corn demolished by mice and tomatoes rotting on the vine. In with the broccoli, cabbage and cauliflowers, followed by the leafy greens and all those root veggies to sweeten in the coming frosts and last all winter long. For a couple of weeks there things were looking good. It was still fine weather for ducks, but at least those ducks were finally in a row.

Unfortunately, this little window didn’t last long -La Nina was determined to go out with a bang! Heavy rains arrived again in mid March and much of this planned autumn bounty was curbed by flooding and saturated soils. To add insult to injury, being in a cool temperate climate means that once the Autumn Equinox passes, the growth rate starts to slow very quickly and so there was little opportunity for many of our growers to replace their losses in time for winter cropping. 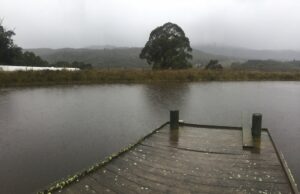 Whilst SHA producers are a resilient and creative bunch and went to great lengths to make the most of the seemingly unending hurdles presented by a very wet year, it is inevitable that the hardship of this season will be reflected in our market and produce boxes over winter. Looking on the bright side, these knocks and hard times always present opportunities to grow, learn, practice gratitude and cherish what we have. As Christina from Prana Produce says, ‘whilst working with nature doesn’t always fit our plans and desires, we feel more humble than ever to have this enriching experience and connection to life.’

If you would like more information about Southern Harvest, our programs or our community of growers, producers and supporters, please email hello@southernharvest.org.au